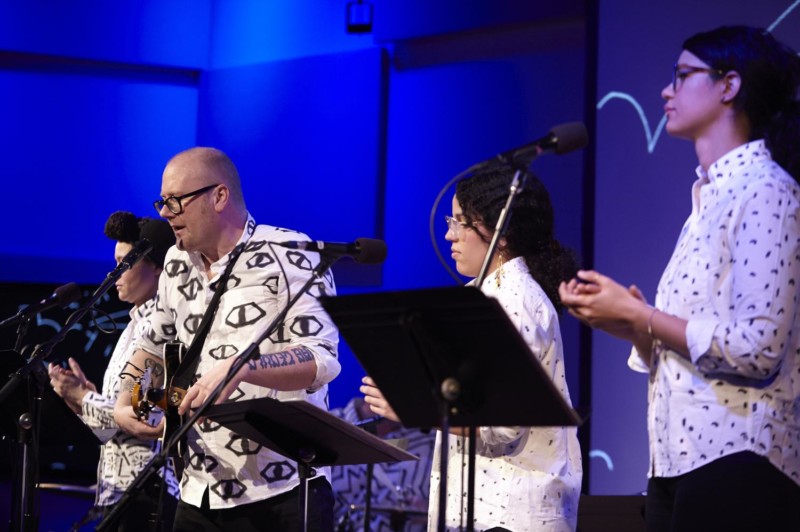 Revisit the soulful, totally rocking world premiere of Mike Doughty‘s Revelation in this encore stream of the rock opera, first performed on our stage on January 28, 2015.

Before Kurt Andersen ended his weekly public radio show, Studio 360, earlier this year, he had an annual tradition of challenging his listeners to make Creative Resolutions. At the beginning of 2014, Doughty, the indie rock star and former Soul Coughing frontman, told Andersen that he wanted to make a rock opera based on the Book of Revelation.

“It is an absolutely terrifying, psychedelic tale of destruction, and the language is so beautiful,” Doughty told  Andersen. “I thought, with the right music and the right visuals, it would be a great show.”

Studio 360 held Mike to his promise, and the result was Revelation. Watch the stream live at 1pm ET right here on this page.

Until we can welcome you back live here in WNYC and WQXR’s living room, The Greene Space is offering daily digital streams to watch from the safety of yours.

We’ll be offering a mix of new live content as well as re-streams of some of the most memorable performances and conversations from our video archives, as a way of keeping us connected with one another and the things that bring us joy.

Watch the video streams live here on our site or on our Facebook and YouTube pages, and if you miss the stream follow those links to watch on-demand at your convenience. Access to all our videos is free, registration is not required.

Sign up for our newsletter here for updates about our video stream schedule, or check our event listings here.

We’re grateful to you, as always, for your support. Take good care, and we hope to see you again soon!

This is a live-stream only event. Access to the stream is free and registration is not required.