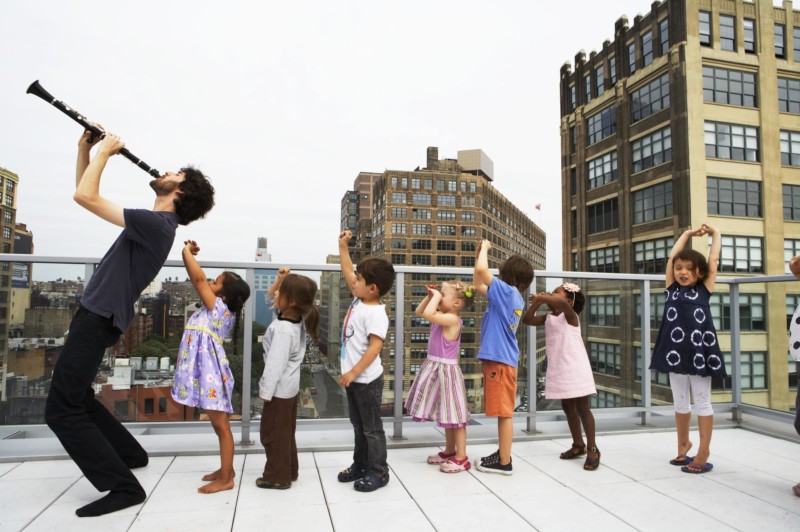 Timbalooloo fundamentally reimagines the way music is taught and how music is conceived by children during their formative years.

Joined by Oran’s friends Clara Net (his Clarinet), the Piano and the Violin, he’ll take kids on an interactive musical journey around the world. Share the excitement that Bach felt as he discovered the newly invented pianoforte in the court of King Frederick the Great of Prussia; play a musical game of hide and seek with Mozart; and even explore some of the music that influenced or was influenced by classical composers — from Eastern European Roma (“Gypsy”) music to great Jazz composers such as Duke Ellington.

After the performance, join us for an after-party at Timbalooloo’s new SoHo space at 131 Varick Street, between Spring and Dominick Streets.

Etkin has been described as a “great clarinet player, excellent improviser” by New York Times critic Ben Ratliff and a “composer of eminent individuality” by his mentor and teacher, the legendary Yusef Lateef. His music is featured on several CDs, including a Grammy Award-winning compilation and he was voted #1 Rising Star Clarinetist in DownBeat Magazine’s 2016 Critics Poll. Grateful for the guidance he received from his teachers David Krakauer, Charles Neidich, Dave Liebman, Yusef Lateef and George Garzone, Etkin feels a responsibility to pass on the joys of music to the next generation. He found he can have the deepest impact by reaching children at a young age, so he spent years creating the Timbalooloo Method, for children 3 months old through early elementary. Harvey Keitel, who enrolled his son in 3 years of Timbalooloo classes, remarked that “our son was talking about Herbie Hancock, Mozart, Samba and African music – and he knew the difference!”