Hear rising stars from The Juilliard School perform selections from some of classical music’s best-loved composers in The Greene Space. Leave the emails, phone calls, and stress behind, and settle in for an hour of musical serenity. Performing today will be the Verona Quartet.

Missed out on tickets? Watch our live video stream here. 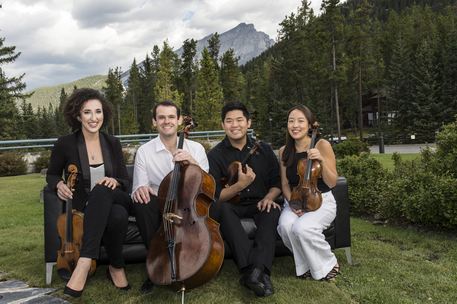 Hailed by the New York Times as “an outstanding ensemble of young musicians”, the Verona Quartet – Jonathan Ong and Dorothy Ro, violins, Abigail Rojansky, viola and Warren Hagerty, cello – is a winner of the 2015 Concert Artists Guild Competition and in just three years, the ensemble has earned a stellar reputation for delivering a “sensational, powerhouse performance” (Classical Voice America) every time they take the stage.

Also in 2016-17, the Verona Quartet enjoys its second year as Graduate Resident String Quartet at The Juilliard School, where they teach as Lisa Arnhold Fellows. Previously the Quartet served as visiting artists at several leading music institutions, including the Beethoven-Haus (Germany), Oberlin Conservatory of Music and will return in 2017 for their second year as Quartet-in-Residence at the Indiana University Summer String Academy.