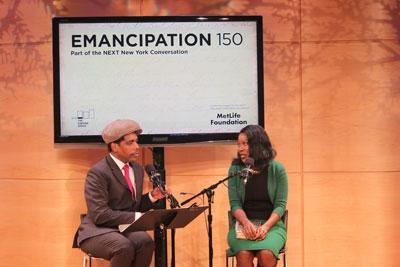 From about 1915 to 1970, more than 6 million African Americans fled the segregationist laws of the rural South for the hope of a better life in the cities of the North, Midwest and West.

Known as the Great Migration, the exodus changed the face of America, resulting in major demographic and social shifts across the United States. Pulitzer Prize-winning journalist Isabel Wilkerson, who documented that movement in her book The Warmth of Other Suns, joined us in The Greene Space earlier this year for our conversation series on the 150th anniversary of the Emancipation Proclamation.

“It wasn’t until 6 million people actually voted with their feet…that things actually changed,” Wilkerson said. They were able to do what the Emancipation Proclamation and the President himself could not immediately do, she said. “And that is, they freed themselves. They freed themselves. And I think that is the most inspiring aspect of all of this.”

As The Greene Space sets to launch its historic reading and recording series, August Wilson’s American Century Cycle, it’s fitting to look back at our conversation with Wilkerson. Wilson’s 10-play cycle examines the African American experience in the 20th century, with each play set in a different decade. In Joe Turner’s Come and Gone, the playwright wrote about this very exodus, which sets up his play, set in 1911: “From the deep and the near South the sons and daughters of newly freed African slaves wander into the city,” he writes. “Isolated, cut off from memory, having forgotten the names of the gods and only guessing at their faces, they arrive dazed and stunned, their heart kicking in their chest with a song worth singing.”

Watch a clip of Wilkerson’s conversation with award-winning poet Carl Hancock Rux above.