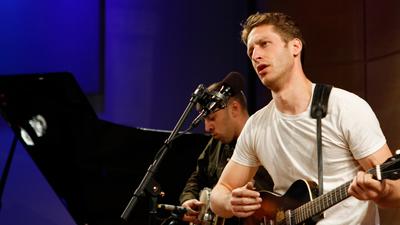 The Americans’ “Sweet and Low” is part of a second installment of a compilation of Pirate Ballads, Sea Songs & Chanteys called Son of Rogues Gallery.

Dreamt up by the Pirates of the Caribbean team of Johnny Depp and director Gore Verbinsk and produced by Hal Willner, the original 2006 collection included starring turns from Nick Cave, Richard Thompson, Bryan Ferry, Bono, Sting, and many more.

Now, with this new collection, Willner has turned to yet another diverse all-star cast — including everyone from Tom Waits and Patti Smith to a Michael Stipe-Courtney Love duet and sissy-bounce star Big Freedia — for more seafaring and hard-living pirate songs.

Willner joined Soundcheck in The Greene Space on February 19 with participants The Americans, Shilpa Ray and Ed Pastorini.